Robots in Manufacturing: Myths and Misconceptions

Maybe you’ve heard that robots are dangerous. That they’re taking good jobs. That they’re expensive, more trouble than they’re worth, or that they have a mind of their own. Misconceptions like these can be frustrating for those of us who work in manufacturing. Don’t let them hold you or your organization back.

In fact, humans have been working alongside machines (and robots) for decades. While it’s true that some robotics have permanently replaced certain jobs, there’s much more to consider regarding workers, automation, safety, and how small and medium-sized manufacturing businesses can respond to a changed landscape.

We’ve learned that some jobs on factory lines may not need human hands, and increasingly, robots are handling those jobs. While a changing jobs landscape is unsettling, we should not lose sight of improvements robots are bringing. Safety outcomes, for example. At the same time we’re seeing robots doing repetitive and intricate tasks, we’re also seeing them replacing humans in many extremely dangerous jobs, in mining, construction, and other industries – as well as in space.

Are they replacing humans in the workplace? We don’t think so. In the past few years, many articles have focused on how some robots (or “cobots”) work alongside or collaboratively with humans. (We’ll discuss cobots more in the future.)

But even as robots “morph” into cobots, AI moves into the manufacturing mainstream, and we continue to reap efficiency and productivity gains from robotics, at the same time, we are learning what they can’t do.

Rather than detailing specific tasks, it may help to think about it this way: robots can solve most problems we put in front of them – but recognizing problems, that oh-so-human realization that “there’s gotta be a better way” is almost certainly a quality we can’t build into a bot.

Rather than worrying that robots will “take” human jobs, then, we think it’s much more important to recognize human traits that cannot be replicated – and how we can use our uniquely human talents to make robots more efficient.

The holy grail of manufacturing is, after all, realizing productivity increases and quality improvements simultaneously. Robots are great at solving problems. Humans have an innate ability to identify problems. While somewhat simplistic, that alone seems to suggest that humans and robots can collaborate to reach much higher levels of productivity, together.

Maybe you’ve heard about a manufacturing facility that bought a robot…and then another…and then another. That it took 5 robots to do the job of one experienced line worker.

As history has proven over and over, of course, evolution in manufacturing don’t happen overnight. (Consider that robots were first installed in a GM plant in Trenton, NJ in 1961 – and their role in the auto making process is still undergoing improvement!)

Whether installing a new robotics line or adding some automation to an established process, inevitably, changes will be implemented to improve the line – that’s the nature of manufacturing, not robotics. As with any other line changes, they will be measured in terms of increased throughput, consistent quality, and continuous operations.

Robots Are a Competitive Advantage for Large Manufacturers

Ironically, small and mid-sized manufacturers are finding that being smaller can give them an edge over larger companies. Being able to quickly set up or modify a line with reliably-sourced used and reconditioned robot parts often allows them to test a process and deliver products to customers faster than larger organizations can. In those cases, a one-stop-shopping experience (no middle man!) gives the small manufacturer the advantage.

Our customers repeatedly tell us that they appreciate having immediate access to robotics, parts and other equipment. Not needing to wait to get a quote and negotiate terms means they can quickly retrofit or re-start a manufacturing line, sometimes before the larger organizations can get a P.O. approved. And, once your company has its robots up and running – you can tell the competition to look out.

Do you have questions about replacement robot parts? Retrofitting a line? Planning a customized work cell? NRTC established iGAM specifically to serve small- to medium-sized manufacturing customers, providing them with convenient access to quality used and reconditioned robot parts and other equipment. Contact us and start flexing your competitive advantage today! 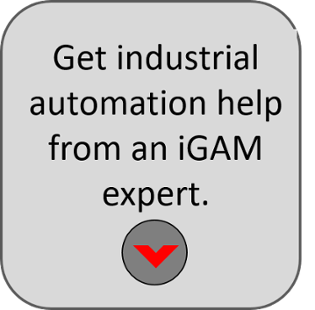